6pm (due to wi-fi issues we are publishing today’s final panel at 16.25 – a first for a conference to be running ahead of itself)

We are very excited to present the artist, Joseph Nechvatal’s Viral Venture

#iorestoacasa is a virtual artefact that visualizes data relative to the COVID-19 pandemic in the form of a particle system. The most relevant data about the virus outbreak is mapped to variables that modify the shape and color of the system. #iorestoacasa was entirely conceived and developed during the period of lockdown that was introduced in Italy, among other nations, to combat the outbreak of the COVID-19 virus. At the very beginning of my confinement at home – everyday at 18:00 – I turned on the news to hear updates on the virus situation. However, after about a week or two, I was so overwhelmed by all the numbers, that they stopped making any sense. That’s when I had the idea to take that same data that made me feel so uneasy and represent it in a more soothing way. A way that would still encourage reflection on the world’s situation and remind everyone of the importance of compliance with the lockdown measures, but less brutally. The title of this work – #iorestoacasa – which translates to ‘I stay at home’, is a tribute to the communal world effort that permitted a halt to the spread of the virus and relieved pressure on the healthcare system.

This artwork speculates a wearable device for new handshake way in COVID-19 period to keep safe social distance between humans. Users can control the warning LED and virtual hand by their phones. This system explores how to show friendly by a silent way without direct contact and communication like traditional manner. I would like to use this “simple” prototype to show audience a new possible way of communication. I appreciate how we can use technology as a better means of communication in these times and I also reflect the inertia of this kind of social change through this ‘odd’ wearable device. Would we go back to normal social contact after COVID-19 and would we be skeptical of other’s contacts and used to socialize with distance in post-COVID era?

Detuned Piano is a project that aims to reflect the impact of misleading information through the Media about the current crisis of Covid-19 on people’s mental health. A big majority of people are getting stressed by receiving misleading information which does not always reflect on reality. As the information changes a little, from one source to the other, people often are not able to recognize how much of the original information is there in the current information they are receiving. At the same time, both receivers and media are constantly interacting with reinforcing and perpetuate the spread of these unreliable sources. This is a performative audiovisual piece consisted of a generative melody of piano sounds that are being processed with a controller. The quality and tonality of the sounds will be visualized on the screen. The unprocessed piano sound represents the original information about Covid-19 as they presented by the government and scientists, the interaction with sound through the controller represent people’s interaction with the information and finally the processed sound and the visualization of it correlates with the misinterpretation of the information by the media and the disturbance they produce on people’s mental state. As this idea of this piece pre-exist the western world’s lockdown, it is an on-going project that evolves and developing by taking the form that best supports its message. Therefore, from an installation in physical space that was the initial idea, it became a prototype installation in my house and now it is ready to evolve in a semidigital performance.

Link to existent documentation of the first version of this piece.

Sea-foam is an artwork inspire by COVID19 Viral modelling, simulate an organic life in the computational method. Sea-foam is composed of lignin, oil and simple protein molecules. These are just some simple element; however, due to the Ecological cycle, this will cause damage to the animals around the sea-foam, which includes human. Instead of modelling the COVID19, this artwork simulates the sea-foam as an image presenting the virus is not evidence to see is harmful but could lead to the catastrophe. Moreover, this manifests behaviour, such as coughing, could release the infection particles to others. The similarity of the virus and the Sea-foam are aware we can not underestimate the tiny but dangerous things.

The map is a simple data visualise program base on the COVID-19 data from parts of Europe country. The program demonstrates the numbers of cases and death. User can click the country to get the data from it. However, when the country’s death number is high, the map will start to displace. I want to use this artwork to raise the concern of the COVID-19. We cannot directly see the virus or death doesn’t mean that we can start to underestimate it. In this artwork, I use a straightforward way to demonstrate the higher risk country, which makes the user and audience more easily to see the impact of the virus. After months, the virus is still impacting our world; people are still being infected and dying. Therefore, we must be more careful when we go out, protecting others.

Marina Zagidullina (Chelyabinsk State University, Russia): We are clever than the brainwashed majority: the visualization of “anti-viral” routes of a COVID deniers’ movement in social and news media

This paper analyzes a media representation of a COVID deniers’ movement. The basis of the deniers’ ideology is a refusal of a lockdown imposed to the majority of the population. “Panic attacks” of collective lockdowns are considered by deniers in conspiracy logics (i.e. “the government tries to benefit from this situation”, “this is a false threat” etc.). The investigation will be focused on the media-aesthetic of the deniers’ movement.

“Tourism had long proven to be a Pyrrhic victory: the yearning for freedom from society has been harnessed by the very society it seeks to escape” (Hans Magnus Ensenzberger). Tourism is engrained in modern life. Comprehending or untangling the dilemmas presented by an abundance of tourists – overtourism - and its impact on local populations, the environment and all the other consequences of tourism is not simple. The Mapping the Local block seminar will focus on comprehending, communicating and visualising these issues. Each working group develops their own artistic practices that examine the tourism puzzle. Each group becomes a tourist agency or non-profit company.  At the beginning of March with the rapid appearance of the COVID-19 crisis the focus of the seminar changed dramatically. Instead of “overtourism” as the theme the issue became one of imagining what ‘tourism’ looked liked in a time of crisis; each of the seven working groups in the class were asked to NOW re-design or envision their tourist agency with special qualities relating the various travel and other restrictions. The results of this process of re-imagining appear now as brochures or advertisements for tourist agencies during the time of the COVID 19 crisis.  The Mapping the Local seminar at the Hungarian University of Fine Arts (MKE) is organised jointly by Eszter Lazar, Allan Siegel and Szabolcs Kisspal from the Intermedia and Art Theory and Cultural Studies Departments; participating students are from MKE and the Erasmus programme of the European Union 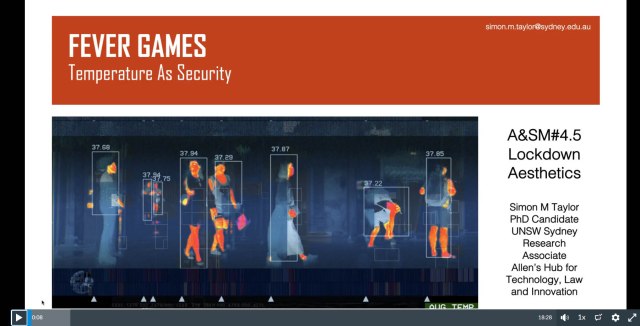 Public-health experts expect fever detections from temperature-scanning to thermal imaging, as modelling of COVID-19 contagion, to become a widespread staple of public life. From airports, workplaces, schools, housing complexes—anywhere we gather en-masse—fever surveillance is a game state that govern rules of labour and play, with FDA regulations of temperature-set conditions to triage cultural matters disrupted by ‘hot’ bodies. But is temperature a useful indicator of contagion? Or is ‘febrile purity’ a cultural value suddenly reframed in measures of heat? If it is medically established “that body temperature is subject to many influences” (Houdas & Ring, 2013) how is it even possible to isolate thermal elements of bodies from surrounding environments? FLIR markets heat-sensing cameras as people flow intelligence. The Oura is a wearable ring with infrared LEDs and NTC temperature sensors. Companies like Amazon use US black-listed technology of Dahua CCTV systems to create a thermal-scape game where ‘body temperature is no longer a piece of private information.’  This is a containment world-order ruled by “temperature taking that precedes decision making.” (Parks, 2014, p. 2518) To make sense of this thermo-cultural game requires analysing operational imaging and sensing calibrations of ‘blackbodies’ to idiosyncratic foundations in the history of medicine, behaviourism, biometrics, and a feverish cultural politics i.e. how “’we are culturally raised to be wary of fever […] and how cultural practices spread as widely as infectious diseases and medicine behind them.” To gain a clearer understanding of how thermal surveillance is a game structure for our bodily matter to circulate in the world, this proposal reviews how the new technical “apparatuses of thermal manipulation establish ‘cuts’ that produce phenomena as usable and as knowable elements of mediation.” (Starosielski, 2016, p. 305) How temperature ‘cuts’ play a key role in the ‘lockdown aesthetics’ of bodies to goals of cultural policies and how ‘cut’ samples distribute the “artefacts of description, creators of habit, shapers of process” (Bateson, 1979, p. 202) A game of thermal-fever now begun.

(This game will go live at 6pm)

This live event will be a re-playing of Will’s The Game for Two Players adapted for social distancing. The players will each need to be a metre away from the table, and a PIR movement sensor will trigger a sanitiser spray. These modifications raise the formality, add rules and another layer of jargon and absurdity to the event. The event will be filmed, and streamed live, followed by the release of a resulting animation, which would also be projected within the space as part of the live event.