Chairing and introducing CCSR In the City seminar on The Municipal Commons: Urban governance and the idea of community hosted at UEL’s USS building on Weds  November 6th.

“Rethinking Judgements on Post-Truth through the Performance of Affective Toning, Contagion and Aesthetic Delight.” Seminar sessions with artist Mikey Georgeson at #SSASS ANIMATIONS AND PROVOCATIONS, Society for the Study of Affect Summer School, July 29 to August 02, 2019, Lancaster PA, USA.

Respondent at the Mediating Presents workshops at Goldsmiths, UoL, 16-17th May.

Co-organizer and introducing the third CERG Silvertown Session on “Community Wealth Building” at RDLAC, North Woolwich on 9th May.

Invited talk at the Department of Media, Culture, Heritage annual seminar series at the School of Arts and Cultures, Newcastle University on 27/02/19 – more details to follow.

Invited talk at the Berlin Transmediale 2019, taking place at HKW from the 31st of January to the 3rd of February. Talking on a panel with Hyphen Labs on neurocultures, structures of experiences and other topics – more detail here. 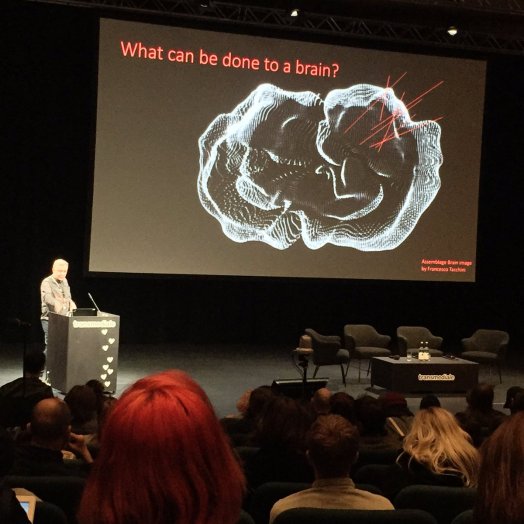 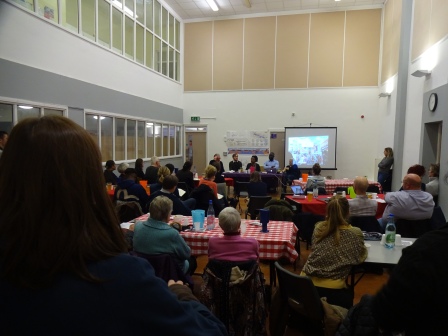 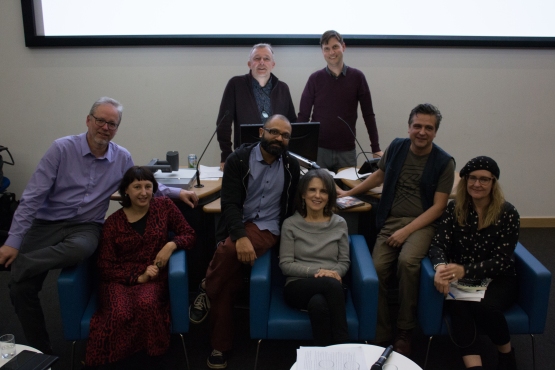 Invited talk at “How to Approach a Problem like Cambridge Analytica through Interdisciplinary Research” presentation at the opening session of the UEL Research and Knowledge Exchange Conference: Interdisciplinary Case Studies, 28th June, 2018. 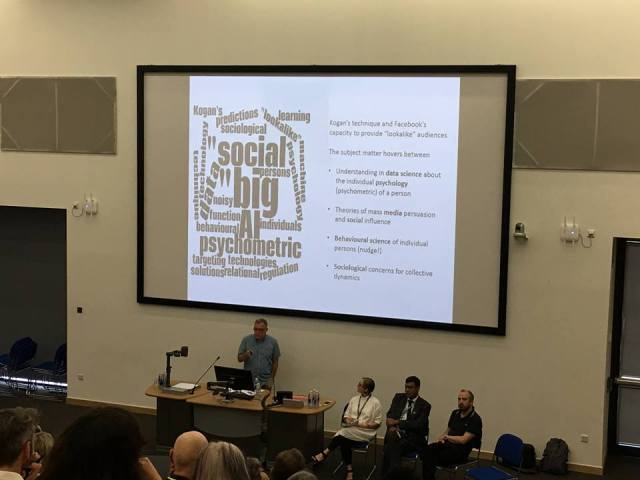 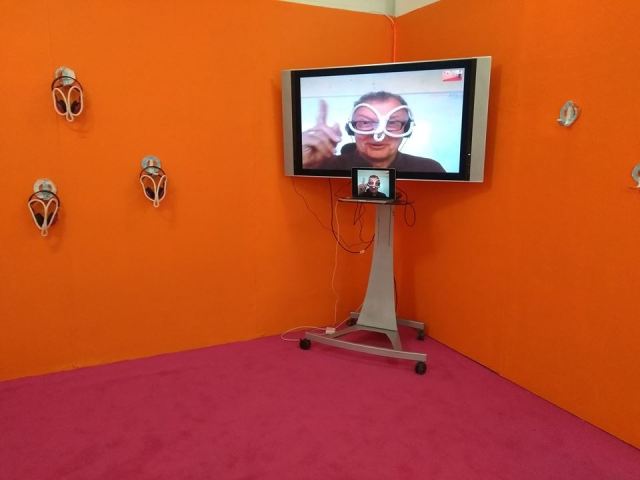 Co-organizer of the Cultural Engine/Essex County Council/UEL conference Resorting to the Coast: Valuing the Past to Shape the Future, Friday 27th April 2018 at the Columbine Centre, Princes Esplanade, Walton-on-the-Naze, Essex. CO14 8PZ.

Invited talk “Tap My Head and Mike My Brain: Neuromarketing and Addiction” at Central Saint Martins (University of the Arts, London) on Tues 7th November at a special public symposium to discuss a new book called Are We All Addicts Now?  co-edited by Vanessa Bartlett and Henrietta Bowden-Jones (Liverpool University Press, Sept, 2017).

Speaker and co-organiser on the “Assembling Empathy” panel at the SLSAeu Empathies conference at the University of Basel on 22nd June 2017 with Greg Seigworth, Darren Ellis and Ian Tucker (see below). 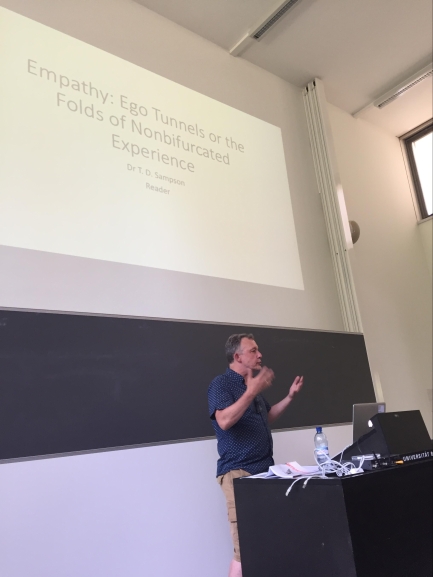 In Basel for Empathies conference

Organizer and host of the Affect and Social Media#3 conference (see below), University of East London, 25th May 2017. 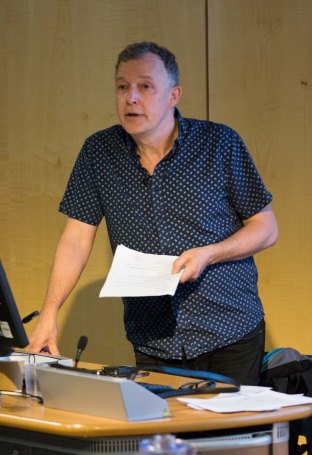 Keynote at the Rietveld Studium in Amsterdam at an event called What is Happening to our Brain? on Tues 8th Feb 2017. This event is open to the public and includes Franco “Bifo” Berardi.

Talk on the Assemblage Brain. A book launch collaboration with artists Mikey Georgeson as part of Georgeson’s The Deadends exhibit at the Studio One Gallery in South West London on Thurs 23rd Feb, 2017.

Invited talk (see below) at roundtable symposium at the University Lincoln, UK, on the theme of ‘Cybernetic Subjectivities and the Mediation of Trust and Empathy’. Inaugural founding event marking the establishment of the Centre for Entangled Media Research, hosted by the School of Film and Media, University Lincoln, UK, 24th-25th May.

Hosting the Affect and Social Media#2 at UEL Docklands on 23rd March 2016.

Invited talk “Waking the Somnambulist: The Capture of Affect, Attention and Memory (and why we need new weapons to stop it)” at The Image of Network symposium, Winchester School of Art (Southampton) organized by Yigit Soncul and Jussi Parikka, Tuesday June 16, 2015.

Invited talk at the Vital Mobilizations: Care and Surveillance in the Age of Global Connectivity conference at the Collège d’études mondiales, Paris, 1-2 June, 2015.

“On Crowds, Publics and the Potential of Assemblages.” An introductory talk at a pre-election Club Critical Theory special event called Where is the Common Ground: Making Local Activism Work In Southend, Upstairs at the Railway Hotel, Southend-on-Sea, Sunday 3rd May, 2015.

Organiser and chair (see below) for the Affect and Social Media#1 at UEL, Docklands campus, Friday 27th Feb, 2015. 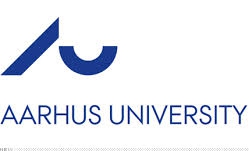 Blurb
In recent years an increasing interest in materiality, space, technology and embodiment has developed in the humanities and social sciences combined with an ëaffective turní (Clough, Massumi, Thrift, Seigworth and Gregg, Ahmed) to immaterial dimensions of these phenomena. This has re-actualised early sociological theories about affective suggestion, contagion and imitation (e.g. Gustave Le Bon and Gabriel Tarde), which offer valuable insights to the analysis of a contemporary cultural landscape characterised by for instance viral/memetic phenomena, mediated/networked/rhythmically coordinated crowds, affective online communication and political modulation of citizen affects (Blackman, Borch, Gibbs, Sampson, Butler). During the summer school we wish to collectively explore the immaterial dimensions of the material social world and vice versa, discuss the potentialities, implications and risks of such analysis in an open interdisciplinary environment.

Keynote (see below) at the “Affective Capitalism” symposium at University of Turku, Finland, June 5-6, 2014.

This symposium aims at describing and understanding a regime we call affective capitalism. In cultural theory, affect is considered to be a fruitful concept in analysing how something evokes our body and mind. Affect makes us act. Affect exceeds or precedes rationality.  In our daily lives we are constantly affected by a plethora of things; our work, our friends, our surroundings, our technologies (Gregg & Seigworth 2010). Unsurprisingly perhaps, we are seeing attempts to capture affect in different fields of contemporary culture from labour to social networks and politics. In these contexts, affect and affection are in an extensive manner organised, produced, and maintained for the needs of capitalism.

Affective capitalism is lucrative, tempting and even sneaky. It merges with established therapeutic discourses and blurs the limits of intimacy at work (Ross 2003; Illouz 2007; Gregg 2011). It is both cognitive and non-cognitive (Sampson 2012); we are being evoked to act in order for companies to make profits in a market economy. Affective capitalism transforms us into assets, goods and services by appealing to our desires, needs and social relationships, or by making us act on a mere gut-feeling.

Invited talk “From Taylor to Neurolabour: Continuities and discontinuities in the three paradigms of HCI” guest talk HCID 2014 at City University, April 23rd, 2014.

Invited talk (see below) at the Bochum Colloquium for Media Studies (bkm) hosted by the Institute of Media Studies at the Ruhr University Bochum, Germany. 3rd Dec, 2013. 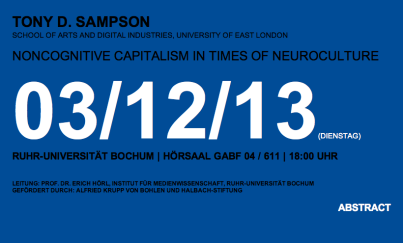 Paper “Leaking Affects and Mediated Spaces” at the Fourth International and Interdisciplinary Conference on Emotional Geographies at the University of Groningen, the Netherlands, 1-3rd July 2013.

Invited talks and workshops “Virality, Chaos and the Brain” for events organized by The Bureau of Melodramatic Research based in Bucharest – 22nd-23rd June, 2013.

Invited talk on Virality as part of the “I am Algorithm” show by the artist Charlie Tweed at the Aspex Gallery in Gunwharf Quays, Portsmouth, 19th June  2013.

Invited talk “Too Much Connectivity” at Brunel and Oxford Brookes University series on Networks and Society, Friday 24th May 2013.

Invited talk “From Virality to Neuroculture” at the Contagion: transforming social analysis and method workshop, Dept in Geography, Exeter University, 13th-14th May, 2013.

Invited talk “Tarde’s Phantom Takes a Deadly Line of Flight” at The Operations of the Global – Explorations of Dis/Connectivity Conference, Warburg-Haus, University of Hamburg, 6th-8th October 2011.

Panel speaker “Press Delete’ The Politics and Performance of Spamculture” at the International Symposium on Electronic Art (ISEA), Dortmond, Germany, 23 to 27 August 2010.