Please email 200 word abstract to t.d.sampson[at]uel.ac.uk. Be sure to include your name, any affiliations and contact email in the same text.

The corporate rhetoric of digital enterprise has often couched connectivity in celebratory terms. There can never be too much connectivity! Expanding on the ambitions and tools of Web 1.0, the social technology paradigm promised to (as Tim Berners Lee put it) connect users to everything and everybody. A social media business model swiftly followed that monetized too much connectivity by way of platform architectures designed to persuade users to spend increasingly more time connecting to each other. Users would now produce more and more relational data through linking to friends (more friends than they had offline!), building groups and communities, posting, sharing, and liking, liking, liking!

Social media is a corporate Empire of Like. It extracts value made from these abundances of connectivity and data. This is an empire that knows no bounds. An empire of excess wherein the endless accumulation and surveillance of all this data seems to be infinite. There can never be too much data. There is so much of the stuff that marketers and consumer researchers often ponder over what exactly to do with it all. What do Facebook really know? Do they know more than we think they know or do they know too much to compute?

Counterintuitively perhaps, these information excesses do not equate to user empowerment. The surpluses of connectivity and data have not produced the assumed information fuelled age of enlightenment. This is a dark age of social media in which James Bridle contends, we may well ‘know more and more about the world,’ but at the same time we are ‘less and less able to do anything about it.’

Platform architectures are designed to do more than make more information available. The behavioural data science teams behind the scenes claim to produce predictable user performances. But more than this, social media developers, researchers and marketers want to stir up a profusion of emotion, feelings and mechanical habits. They want impersonal affects to overflow their threshold points and spread contagiously through transmedia communities. These are viral flows and contaminations that produce affective bonds (Karppi, 2018), keeping users engaged in the process of making more and more sharable data. It is indeed these affective bonds of social media which become entangled with a more-than-human user experience (Clough, 2018).

Much attention has been paid to the negative effects social media can have on a user’s emotions and mental health. Social media addictions and potential overdoses are endemic to a discourse of care. Are We All Addicts Now? Systems of withdrawal, detox, and disengagement have been proposed as an antidote. Yet, as personalities and technologies collapse into Clough’s impersonal user experience (and Chun’s YOU), what kinds of care system can ease the pain of identity loss? What happens when the “I” of the user collapses into these impersonal experiences to become a Facebook lookalike audience?

The failure to produce mass disconnection shows the extent to which digital dependencies are produced by a kind of Skinner’s Box. It is the seemingly endless circulation of impersonal affects in these boxes that bring users together in involuntary acts of collective mimicry, and keeps them pecking for more. 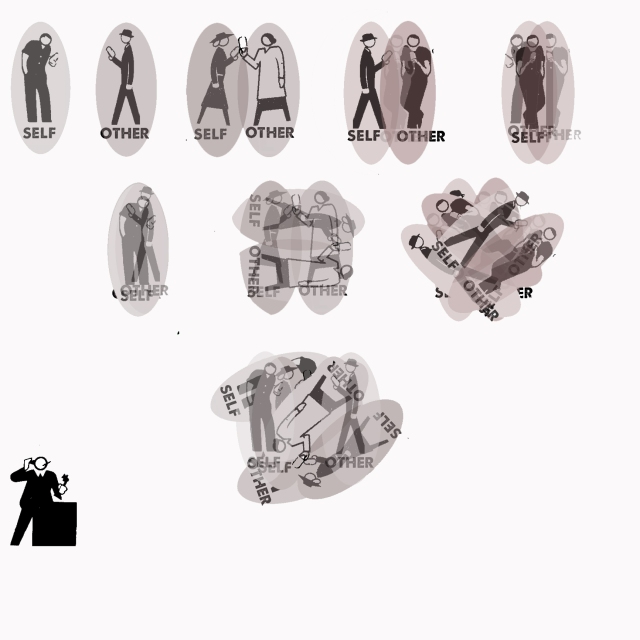 A New Syntax for User Experience by Mikey B Georgeson

Should we be surprised? Social media appears to have been predesigned for More-Than. As Vaidhyanathan (2019) argues, Zuckerberg’s original design intentions have been dramatically supervened by unanticipated uses of the original Facebook architecture. The overproduction of online harms, hate speech, rumours, conspiracy and fakery are surplus platform productions that algorithms churn and digital immune systems struggle to frustrate. This is a design that has proven to be the perfect environment for a divisive populist politics with further excesses of hate and online harm.

Zuckerberg thinks the solution to these immunological breaches will be AI. And yes, AI is of course a More-Than production of experience. It produces digital emotions which portray, detect, and manipulate predictable patterns. In the social media behaviourist labs, the psych-corps are able to clandestinely experiment on users as if they were Skinner’s pigeons. Users become caught up in a teleological suspension of ethical research. This is a More Than production of pecking subjectivities.

But at least this overproduction is kept to online phenomena only. It all seems so clean. The user experiences of social media is a world away from the smog filled streets and bush fires of climate disaster. Up here in the fluffy whiteness of the digital clouds, it would appear that the only waste users have to manage is the limitless waste of time these platforms offer for thumb exercises.

But of course, digital clouds are not fluffy white areas for excess data storage. The cloud is itself a more-than atmosphere. It is an ideological avatar. More precisely, these clouds are not virtual, but are toxic clouds that obscure the actual dirty heat of the corporate social media server centres. What we find, then, in the cloud, is a user experience of time wasting readily aligned to the excesses of digital junk and the toxic sludge of the Anthropocene.

But after all this dystopian media theory dirge is expended, could there not be a more promising More Than, yet to come? Can the user experience be wrestled back from the clutches of the dark refrains of corporate social media and poisonous populisms? Or will the finite overproductions; the endless acceleration of more thans, reach a point where perhaps endless accumulation turns in on itself. A point where more thans become other thans or more than more thans, perhaps? Like Deleuze and Guattari’s final affirmative more than in What is Philosphy? is there a new people yet to come. We might already be seeing the start of a new ‘intuitive digital subjects’ (Serres, Pedwell) whose habits and addictions are not steered by way of behavioural marketers any longer, but instead delegated and synthesised to digital technologies, opening up cognitive capacities and affective atmospheres in which users might experience ‘intuitive’ modes of being-in-the-world.

Evidently, the list is endless, but here are some other More-Than topics to ponder…

More Thans by Mikey B Georgeson

Tony D. Sampson is Reader in Digital Culture and Communications at the University of East London. He has a PhD in social-cultural-digital contagion theory from the Sociology Department at the University of Essex. He is a former art student who re-entered higher education in the UK as a mature student in the mid-1990s after a long stint as a gigging musician. His career in education has moved through various disciplines and departments, including a maths and computing faculty, sociology department and school of digital media and design His publications include The Spam Book, coedited with Jussi Parikka (Hampton Press, 2009), Virality: Contagion Theory in the Age of Networks (University of Minnesota Press, 2012), The Assemblage Brain: Sense Making in Neuroculture (University of Minnesota Press, 2016), Affect and Social Media (Rowman and Littlefield, July 2018) and The Sleepwalker's Guide to Social Media (due 2020 with Polity Press). Tony is the organizer and host of the Affect and Social Media conferences in the UK (see archive on this blog). As a co-founder and co-director of the public engagement initiatives, Club Critical Theory (CCT) and the Cultural Engine Research Group (CERG), Tony has been project lead on a number of funded projects that bring impactful critical theories into the community and local political sphere to approach. These activities have included large conferences, symposia and informal lectures/workshops in pubs and community centres, co-organized with community groups and local authorities. Tony occasionally blogs at: https://viralcontagion.wordpress.com/ Full academic profile: https://www.uel.ac.uk/Staff/s/tony-sampson
View all posts by Virality →
This entry was posted in Affect and social media, affect theory, Art, Digital Culture, Media Philosophy, Uncategorized and tagged cfp. Bookmark the permalink.