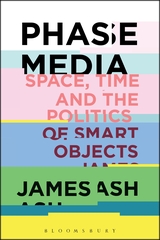 Looks good!
Phase Media: space, time and the politics of smart objects
Bloomsbury Press, New York (2017)
James Ash
In Phase Media, James Ash theorizes how smart objects, understood as Internet-connected and sensor-enabled devices, are altering users’ experience of their environment. Rather than networks connected by lines of transmission, smart objects generate phases, understood as space-times that modulate the spatio-temporal intelligibility of both humans and non-humans. Examining a range of objects and services from the Apple Watch to Nest Cam to Uber, Ash suggests that the modulation of spatio-temporal intelligibility is partly shaped by the commercial logics of the industries that design and manufacture smart objects, but can also exceed them.

Drawing upon the work of Martin Heidegger, Gilbert Simondon and Bruno Latour, Ash argues that smart objects have their own phase politics, which offer opportunities for new forms of public to emerge. Phase Media develops a conceptual vocabulary to contend that smart objects do more than just enabling a world of increased corporate control and surveillance, as they also provide the tools to expose and re-order the very logics and procedures that created them.

“James Ash’s Phase Media offers a new way to conceptualize how smart objects are becoming part of and active in our lives, environments and the processes of change that characterize the contemporary world. Providing a welcome alternative to network and new materialist approaches, Ash invites us to consider how smart objects themselves are implicated and active in constituting everyday worlds and change processes. In doing so it provokes new theoretical imaginaries of what smart objects are, how they might impact on our lives, and the implications of this for ethical technological futures. This book is essential reading for anyone interested in understanding how smart technologies are emerging as part of our contemporary and near future worlds.” –  Sarah Pink, Distinguished Professor of Design and Media Ethnography, RMIT University, Australia