This in the Independent today…

A memo has been sent to Conservative MPs advising them on how to avoid having to pay interns. The document says it is wise to avoid certain words and phrases in job adverts in case they create “potentially hostile” situations with unpaid staff.

The memo, revealed by the student advice website Graduate Fog, warns that the term “intern” does not actually exist in UK law and that someone is either a volunteer or a worker entitled to the minimum wage.

In order to “significantly reduce the risk of potential hostile questioning about the status of the role”, Tory MPs are advised to avoid using words and phrases such as “work”, “tasks”, “hours of work”, “you will be expected to” and “payment of expenses”, it says.

Instead they should say things like “the kind of activities it would be great to get some help with include…” The memo adds: “Rather than ‘intern’, use the phrase ‘campaign volunteer’.”

The TUC said the memo brought the law and parliament into disrepute. The Conservative Party said it was simply trying to be a responsible employer.

Intern Nation: How to Earn Nothing and Learn Little in the Brave New Economy
by Ross Perlin 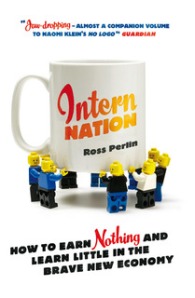 Every year, between one and two million Americans work as interns. They famously shuttle coffee in a thousand newsrooms, congressional offices, and Hollywood studios, but they also deliver aid in Afghanistan, build the human genome, and pick up garbage. Ross Perlin’s book is the first expose of the exploitative world of internships, and its hardcover publication precipitated a torrent of media coverage in the US and UK. In this witty, astonishing, and serious investigative work, Perlin profiles fellow interns, talks to academics and professionals about what unleashed this phenomenon, and explains why the intern boom is perverting workplace practices around the world. Insightful and humorous, INTERN NATION will transform the way we think about the culture of work.