Skip to content
Virality, Chaos and the Brain – a workshop with Tony D. Sampson
Organized by The Bureau of Melodramatic Research
——- supported by Erste Foundation ——–
22nd and 23rd of June

22nd June, Saturday, 17:00 – 20:00
The first discussion will begin by introducing the conceptual approach behind the book Virality: Contagion Theory in the Age of Network (Minnesota, 2012). This is a diagrammatic rendering of social contagion drawing on the work of Gabriel Tarde and Gilles Deleuze. The lectures will then explore two stratagems of networked virality. The first, the immunologic, is a discursive formation or series of analogical propositions relating to the spreading of fear from biological to nonbiological contexts. The second, viral love, is typified by Obama-love and appears to be far more catching. It works according to nondiscursive resonances and affective atmospheres. It speaks of the event, not the essence. The aim of exploring these two stratagems is to tease out the subtly and softness of cognitive and affective power relations in the control society.The workshop that follows this lecture asks how stratagems can be developed to counter the contagions of fear and love.
23rd June, Sunday, 17:00 – 20:00
The second lecture will open up Deleuze’s long standing interest in neurophilosophy and look again at the brain’s confrontation with chaos. By doing so two main questions are posed: what can be done to a brain and what can a brain do? The first looks at the rise of so-called neuroculture, and focuses particular attention on the inventions of 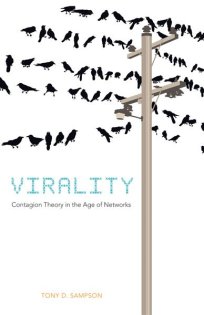 neuromarketing as an extension of cognitive labour. These new techniques of persuasion and absorption are intended to capture the chemical firings of the neuron and put it to work in new ways. The latter explores the potential of a nomadic brain that can confront chaos and escape the objectified brains of neuroculture. Here Deleuze’s interest in the relation between science, art and philosophy helps to prompt important questions for this event.The workshop that follows this lecture asks how the common brains of artists, scientists and philosophers can respond to chaos, each other, and more significantly, how do they become nomadic.
Tony D. Sampson is a theorist and writer who works as Reader at the University of East London. He has written on virality and networks, and with Jussi Parikka co-edited the Spam Book: On Viruses, Porn and Other Anomalous Objects from the Dark Side of Digital Culture (2009).
The Bureau of Melodramatic Research: http://thebureauofmelodramaticresearch.blogspot.co.uk/