The Return of Crowd Contagion? 2 of 3

The contrast between the student protests in London, which have, after the storming of Tory HQ in November 2010 and political defeat a month later in Parliament Square, seemingly lost momentum, and the contagious English Riots is worth considering. On one hand, the fury of the students was contained in police kettles, on the other, the spontaneity of the summer riots left the authorities mostly ineffectual. What kind of desire-event fuelled the riots? Perhaps they were an aberration of consumerism as some have suggested (The Guardian, Monday 5 December 2011). These were consumer subjectivities in the making. As widely reported the rioters couldn’t believe their luck. Christmas had arrived early, and stuff was for free! The good news quickly spread on the streets and through Blackberry too, as well as via wall to wall TV and press coverage. But more importantly the riots revive an old perplexing question concerning the subjectivation of the poor. That is, how astonishing it is that after centuries of exploitation they only riot and steal on rare occasions rather than on a regular basis (See Deleuze and Guattari, 1984)

Cameron: “this is criminality”

Perhaps the rioter’s desire to loot needs to be grasped in this light as a kind of perversion of the desire to shop: an anomalous desire-event that reappropriated, for a few days at least, the everyday enslavement of the shopping mall the consumer subject commonly desires for himself and others. The answer will certainly not be found within the riotous crowd itself, but rather within the problem of the viewing public. While a few thousand watched the protests and riots on YouTube, the larger public experienced a pacifying action-at-a-distance via coverage of student “attacks” on the royals and the fire extinguisher thrown at the police. The enduring media images of the rioters are of plasma TVs being ripped from the walls of an electrical store.

It is difficult to put into words the vital force of a contagious desire-event as it flows upward through the stratifications of social power. Following Tarde, Thrift has called similar processes of affective contagion an imitative momentum of conversation and gesture, “boosted and extended by all manner of technologies.” It is a continuous “adaptive creep” which is both the background and foreground of the contagion that spreads (Thrift, 2009). Yet the Arab Spring has enabled us to witness firsthand the impetus of revolutionary contagion reach its threshold. For instance, take a look at Philip Rizk and Jasmina Metwaly’s short film of crowds pouring out of Imbaba on the 28th Jan 2011 on their way downtown to Tahrir Square. There are a few similarities here with the events in England. Certainly, Mubarak’s government has long “stigmatized neighborhoods like Imbaba as a netherworld of crime and danger” (New York Times, Feb 15 2011). 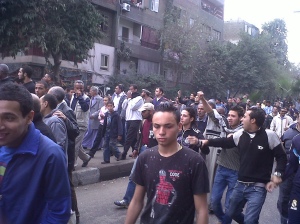 Like the many locations in which the English Riots took place it was rendered an apolitical zone. The intensity of the emotions of this disenfranchised crowd is comparable to the English looters too. But the energy is somehow steered from these deprived neighbourhoods toward the political centre of the capital city. This is not an event guided by Web 2.0 alone. Internet access in Egypt is amongst the lowest in North Africa and the Middle East. Imbaba in particular is not the domain of Facebook politics or the Twittering classes. The networkability of the desire-event spread from person to person tapping into the rage of Cario’s poor who bore the brunt of Mubarak’s brutal dictatorship for years. The crowd, Rizk tells us, chants “inzel! inzel!” (come down! come down!), a call to neighbours to join the march and demand the fall of the regime. Like the poor neighborhoods of Sidi Bouzid where the Arab Spring began in Tunisia with the immolation of the street vender, Mohamed Bouazizi, the momentum moves rapidly to the government buildings.

Alexandra Topping and Fiona Bawdon  “It was like Christmas’: a consumerist feast amid the summer riots” The Guardian, Monday 5 December 2011. http://www.guardian.co.uk/uk/2011/dec/05/summer-riots-consumerist-feast-looters

This is a somewhat adapted version of Deleuze and Guattari’s references to Wilhelm Reich on the mass psychology of fascism in Gilles Deleuze and Félix Guattari, Anti-Oedipus, (London: The Athlone Press, 1984), 37-38.

Nigel Thrift, “Pass It On: Towards a Political Economy of Propensity,” 8.

Philip Rizk and Jasmina Metwaly made this remarkable video of a huge popular protest in Cairo on 28 January.

Tony D. Sampson is Reader in Digital Culture and Communications at the University of East London. He has a PhD in social-cultural-digital contagion theory from the Sociology Department at the University of Essex. He is a former art student who re-entered higher education in the UK as a mature student in the mid-1990s after a long stint as a gigging musician. His career in education has moved through various disciplines and departments, including a maths and computing faculty, sociology department and school of digital media and design His publications include The Spam Book, coedited with Jussi Parikka (Hampton Press, 2009), Virality: Contagion Theory in the Age of Networks (University of Minnesota Press, 2012), The Assemblage Brain: Sense Making in Neuroculture (University of Minnesota Press, 2016), Affect and Social Media (Rowman and Littlefield, July 2018) and The Sleepwalker's Guide to Social Media (due 2020 with Polity Press). Tony is the organizer and host of the Affect and Social Media conferences in the UK (see archive on this blog). As a co-founder and co-director of the public engagement initiatives, Club Critical Theory (CCT) and the Cultural Engine Research Group (CERG), Tony has been project lead on a number of funded projects that bring impactful critical theories into the community and local political sphere to approach. These activities have included large conferences, symposia and informal lectures/workshops in pubs and community centres, co-organized with community groups and local authorities. Tony occasionally blogs at: https://viralcontagion.wordpress.com/ Full academic profile: https://www.uel.ac.uk/Staff/s/tony-sampson
View all posts by Virality →
This entry was posted in Uncategorized and tagged Contagion, Contagion theory, Deleuze and Guattari, English Riots, Gabriel Tarde, Imbaba, Nigel Thrift, Philip Rizk. Bookmark the permalink.