The Orwellian dystopia of Doublespeak is very much in vogue right now thanks to concerns over Trump’s use of “alternative facts”. But alternative facts are just the tip of a dystopian iceberg that owes more to the soft brainwashing technologies of Aldous Huxley’s Brave New World than it does to 1984’s harsh Stalinist oppressions and propagandist trickery.

To grasp the Huxleyesque nature of current events we need see them as part of a culture increasingly pervaded by the ideas of neuroscience – what I have termed neuroculture.

The origins of neuroculture begin in early anatomical drawings and subsequent neuron doctrine in the late 1800s. This was the first time that the brain was understood as a discontinuous network of cells connected by what became known as synaptic gaps. Initially, scientists assumed these gaps were connected by electrical charges, but later revealed the existence of neurochemical transmissions. Brain researchers went on to discover more about brain functionality and subsequently started to intervene in underlying chemical processes.

On one hand, these chemical interventions point to possible inroads to understanding some crucial issues, relating to mental health, for example. But on the other, they warn of the potential of a looming dystopian future. Not, as we may think, defined by the forceful invasive probing of the brain in Room 101, but via much more subtle intermediations.

Huxley’s Brave New World (1932) is about a dystopian society that is not controlled by fear, but rendered docile by happiness. The mantra of this society is “everybody’s happy now”. As Alex Hern argues in The Guardian, Huxley presents a more relevant authoritarian dystopia to that of 1984, one that can still be “pleasant to live in for the vast majority, sparking little mass resistance”. The best dystopias are often dressed up as utopias.

It is Huxley’s appeal to emotional conditioning that most significantly resonates with today’s dystopian neurocultures. He noted the clear advantages of sidestepping intellectual engagement and instead appealing to emotional suggestibility to guide intentions and subdue nonconformity.

As such, to achieve its goal, the society of Brave New World combines two central modes of control. First, the widespread use of the joy-inducing pharmaceutical, Soma, and second, a hypnotic media propaganda machine that works less on reason than it does through “feely” encounters.

Today’s neurocultures correspond to these technologies in conspicuous ways. To begin with, the rise of neuro-pharmaceuticals, like Prozac, have drawn attention to a growing societal need for self-medicated happiness. But equally alarming is the rise in prescriptions for ADHD treatments, like Ritalin, which control attention while simultaneously subduing difficult behaviour. The ADHD child’s mental state is a kind of paradoxical docile attentiveness.

The College of Emotional Engineering

Comparisons can also be made between Huxley’s College of Emotional Engineering and contemporary social media. In his book, the college is an important academic institution found in the same building as the Bureaux of Propaganda, with a unique focus on emotional suggestibility. This is where the feely scenarios, emotional slogans and hypnopedic rhymes are written. This kind of propaganda is for mass media consumption, but today’s emotional engineering takes place in far more intimate and contagious arenas of social media.

The idea that social media acts as a vector for both positive and negative emotional contagions might help us to rethink Trump’s ability to seemingly tap into certain negative feelings of disillusioned US voters. Certainly, the contagion of fake news is typically a poisonous concoction of fear and hate. But much of the populist appeal of Trump (and Brexit) has perhaps played on more joyful encounters with celebrity politicians than those experienced with the dry intellectual elites of conventional politics.

The pervasiveness of today’s neuroculture started with the neuroscientific emotional turn in the 1990s. Scientists realised that emotions are not distinct from pure reason, but enmeshed in the very networks of cognition. The way we think and behave is now assumed to be greatly determined by how we feel.

The seismic influence of this profound shift has extended beyond science to economic theories concerned with the neurochemicals that are supposed to affect decision making processes. It also underpins new models of consumer choice focused on the “buying brain”. The advent of neuroeconomics, followed by neuromarketing, has resulted in further spin-offs in product design and branding informed by emotional brain processing. The consumer experience of a brand is now measured according to the frequency of brainwaves correlated with certain attentive and emotional states.

Perhaps there’s nothing new in neuroculture. Advertisers have been trying to infect feelings since the advent of advertisements. Similarly, politicians have been kissing babies for affect since the age of the crowd. Maybe my idea of neuroculture is an example of what has been cynically termed neuro-speculation. But in an age hastened by social media and self-medication, there is a dystopic intensification of infected and manipulated feelings that cannot be ignored.

Not everyone agreed with Huxley’s predictions of a neuroscientific dictatorship. One literary critic once compared him to a rabbit going down a hole only to think all the world was dark.

But it was the attention he received from scientists that should alert us to the profundity of his dystopia. In particular, the 20th century scientist Joseph Needham argued that scientific knowledge is not immune to political interferences. Needham called Huxley’s Brave New World an “orchid garden” – a demonstration that scientific knowledge does not always lead to a bed of roses. Huxley, he noted, helps us to “see clearly what lies at the far end of certain inviting paths”.

This article was originally published on The Conversation. Read the original article.

Interesting to see this “Map of Neuromarketing Companies” published on the neurorelay website. (http://neurorelay.com/)

A good point perhaps at which to very briefly introduce some early thoughts on the spread of a dystopian neuroculture and its relation to Deleuze’s control society.

The Dystopia of Noncognitive Control 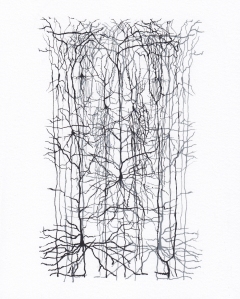 Like so many other popular journalistic portrayals of neuromarketing an article published in The New York Times in 2008 titled “Is the Ad a Success? The Brain Waves Tell All” is in seemingly incontestable awe of the claims that unconscious consumption can be measured directly at the brain. “Never mind brainstorms. These days, Madison Avenue is all about brain waves.” In all fairness, the article does at first strike a note of caution by recognizing that “some consumer advocates question the role of biometrics in ad research.” It partially acknowledges, as such, concerns over what it calls a “blending” of Weird Science and Mad Men, which “will give marketers an unfair advantage over consumers.” But these concerns are summarily dismissed; not least because the passionate adoption of biometrics and brain imaging technology by marketers is a logical response, they claim, to the slowing of the US economy after the banking collapse in 2008. Since neuromarketers are only really interested in how people feel and react in these difficult financial times there should be little cause for concern. As one marketing representative puts it, neuromarketing does not aim to “meddle with normal, natural response mechanisms.” It is just interested in what consumers are paying attention to. This is after all an attention economy in which the drivers of focused mental engagement are at a premium. Robert E. Knight, the director of the Helen Wills Neuroscience Institute at the University of California (a chief science adviser to a Berkeley based neuromarketing company) says “[w]e’re not trying to predict an individual’s thoughts and actions… [or] trying to input messages.” There are no electrodes fed directly into the brain. Participants are willingly rigged up to noninvasive brain imaging technologies, galvanic skin response devices and eye tracking software. These tests are generally carried out in the very early stages of product research and development so that brands can be readily primed for consumption. So in many ways there is nothing new here. The goal of market research has not changed. It has always sought to attract attention by conditioning and anticipating consumer experiences in advance with the intention of seducing and guiding intent by mostly subconscious means. The difference today is, however, that the data captured from these experiences purportedly comes directly from cognitive and noncognitive registers in the brain. As a result, the capture of anticipation becomes a series of correlative cognitive and affective triggering exercises quite often spanning the lifetime of a brand. This is how the Mad Men of neuroculture claim to be able get inside the buying brain and guide it, often unconsciously, toward purchase intent.

As uncritical and overhyped as it maybe, popular media discourse surrounding neuromarketing point to something both familiar and unfamiliar about the kinds of control circuits and technologies of power consumer societies are subjected to in the 21st century. On one hand, neuromarketing is endemic to a recognizable trajectory of marketing power that has, in the past, sought to capture the attention of a population confined to their living rooms via mass media television channels. However, today, the aim is, it seems, to adapt to networked, mobile media so as to expand marketing control. Of course, this kind of control needs to be grasped in contrast to the violence of sovereign control. It is a power that does not need to be physically administered, inherited or possessed, but rather becomes furtively distributed through a population. Similarly, in contrast to the disciplinary architectures of enclosure found in Foucault’s factories, prisons, schools, clinics etc.; control has become an open modulating force, which can change from point to point and from one moment to the next. There has in fact been a deepening of this post WW2 power distribution in terms of marketing. In comparison to the Mad Men of the mid twentieth century, for example, who reached out directly to the masses via the broadcast media; marketing power today is increasingly indirect. On the other hand, what I suggest here is that the neuromarketer endeavours to expand networked power far beyond the usual reach of mediated communication. Via mobile and ubiquitous network technologies marketing has not only been able to connect to the masses at an interpersonal level, but it has also drilled down into infrapersonal communication flows; tapping into cognitive and affective transmissions emitted by what we might call the networked dividual; that is to say, the endlessly divisible body; brain, neuron, neurochemical substances, molecules, atoms, and the infinitely small society of the monad. This is a point where the digital network intersects with the neuronal network. Moreover, neuromarketing is a technology of power intended to control thought noninvasively. This is no Orwellian dystopia. There is certainly no need for Cold War style electrodes to be directly fed into the brain since the soft controls of the dystopian imagination of William Burroughs and Aldous Huxley have been provided with a neuroscientific universe in which to live. Control today is therefore difficult to pin down. There are no wires. Control has become much softer, and, as such, more difficult to escape. Premediated persuasion, anticipatory reward systems, and brain absorption become the watchwords of an all pervasive neuromarketing. It is, as a consequence, imperative that those who enter into this neurocentric world of shadows do so with (a) a sense of how the present appears to be mapped onto these dystopian imaginations, and (b) an escape plan.