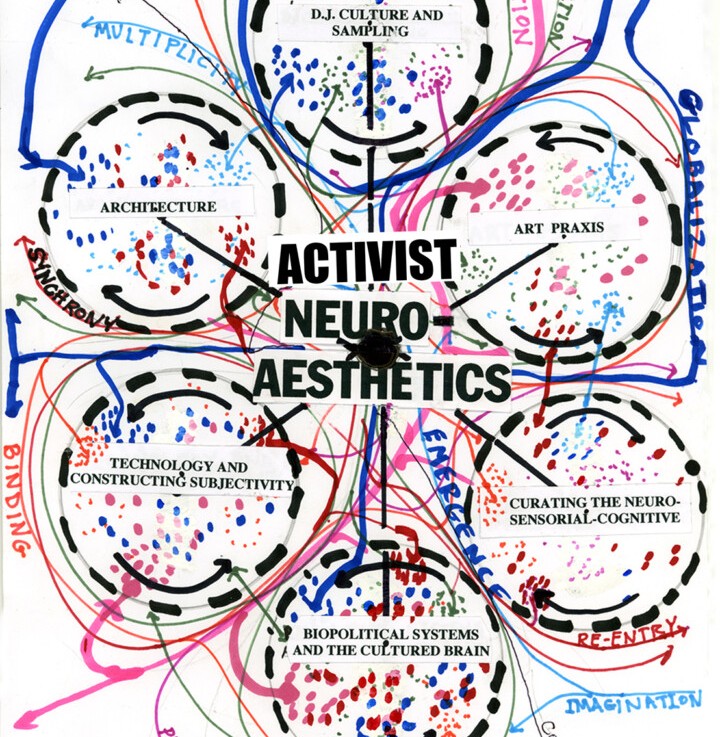 This summer school/conference should be of interest to people into neuroculture.

in collaboration with artbrain.org
July 1 – 16

The brain and mind are the new factories of the twenty-first century in what is referred to as cognitive capitalism, where workers have transitioned from proletariats to cognitariats. Here, the brain not only refers to the intracranial brain consisting of neurologic matter, but also the situated body and the extracranial brain composed of gestalts, affordances, linguistic atmospheres and socially-engaged interactions. Just as the pioneers of cognitive capitalism (such as Tony Negri, Maurizio Lazzarato, and Mario Tronti among others) realized the coming digital economy would have serious consequences for labor and the production of subjectivity, the transition from the information economy to the neural-based economy (or neural capitalism) is a new moment of crisis with even greater challenges. Activist Neuroaesthetics questions what neuro-enhancing drugs, new technologies (like brain-computer interfaces that link the brain to the internet currently explored by companies like Facebook and Neuralink), and the transition from artificial neural networks to artificial intelligence will do to our sense of self and freedom.

Activist Neuroaesthetics understands that our capacity to consciously and directly affect our complex environment of evolving relations through artistic interventions is key to an emancipatory ethics. By consciously refunctioning and estranginging the environment, we are estranging and refunctioning our material brain’s neural plastic potential – literally enhancing its capacity to ‘think outside the box.’ This cognitive activism forms the basis of Activist Neuroaesthetics which resists new forms of subjugation at work in neural capitalism. Activist Neuroaesthetics is more than simply an aesthetic response, but is also a way of reengineering what aesthetics as a philosophical concept means. As such, Activist Neuroaesthetics pro-actively forms a counter-insurgency against the tactics of the neural economy which attempts to privatize and normalize the suppression of free thought and produces a regime which further weakens the cognitariat and makes obvious neural capitalism’s totalitarian tendencies.

This year’s Saas-Fee Summer Institute of Art program will take place online in collaboration with ACTIVIST NEUROAESTHETICS, a celebration of the 25th anniversary of artbrain.org. ACTIVIST NEUROAESTHETICS is a year-long festival of events curated by Warren Neidich, Susanne Prinz and Sarrita Hunn including a three-part exhibition (Brain Without Organs, Sleep and Altered States of Consciousness, and Telepathy and New Labor), conference, screenings, lectures and publications, developed by lead institution Verein zur Förderung von Kunst und Kultur am Rosa-Luxemburg-Platz e.V. with various local partners that will take place online and in Berlin over the course of 2021. In July, an ACTIVIST NEUROAESTHETICS Conference will be held in collaboration with Saas-Fee Summer Institute of Art.

Applications for SFSIA 2021 | online are open to students, practitioners and scholars from the fields of art (including video, painting, photography, sculpture and installation), design, architecture, critical writing, neuroscience, science and technology studies, critical theory, cultural studies, film and media studies, and beyond.

Please note this online program is focused around discussion-oriented seminars and public lectures listed in the program schedule. Additionally, participants should plan extra time for the required Reader and to informally connect and engage with other participants as interest and time allows.